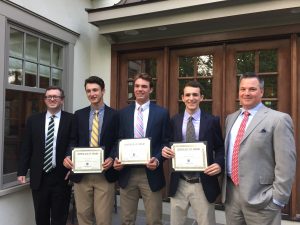 The College Men’s Club of Westfield announced that it has awarded more than $60,000 in scholarships to four outstanding seniors from the Westfield High School Class of 2016: William Kelly, JD Marner and Michael Vricella-Stokes each received a $20,000 scholarship and Jacob (Jack) Ritter (not pictured) received a $1,000 scholarship named in memory of Keith Hertell, II.

“In a change from the past several years, we decided to reduce the number of scholarships that we awarded this year so that each scholarship could be a significant contributor to a student’s college costs,” said Brad Bonner, co-chairman of the College Men’s Club scholarship committee. “That generated a lot of interest in our program and we saw an unprecedented number of applications this year.”

Kelly, the oldest of four brothers, will attend Notre Dame where he plans to study finance.  He was a captain of the state championship-winning WHS boys tennis team.

Marner is the oldest of three brothers. He will attend Rutgers University this fall, where he plans to study accounting.  He played on the state champion WHS football team and the WHS baseball team.

Vricella-Stokes will attend the University of Denver where he plans to study mathematics.  He is an Eagle Scout, served as treasurer for the senior class and was awarded six varsity letters.  His older brother Joseph was awarded a scholarship from the College Men’s Club in 2014.

Ritter will attend the University of Indiana, where he plans to study music.  He was involved in music and drama programs at WHS and he has a strong interest in public policy and politics.

Kelly, Vricella-Stokes and Ritter were members of the National Honor Society.

“Receiving a scholarship award is just the start of the relationship that we’ll have with William, JD, Michael and Jack,” said Shawn Hanna, president of the College Men’s Club. “We will stay involved with them during their college careers and as young professionals as a resource for advice and counseling.”

The club has raised over $1 million in scholarship money for young men since 1922.