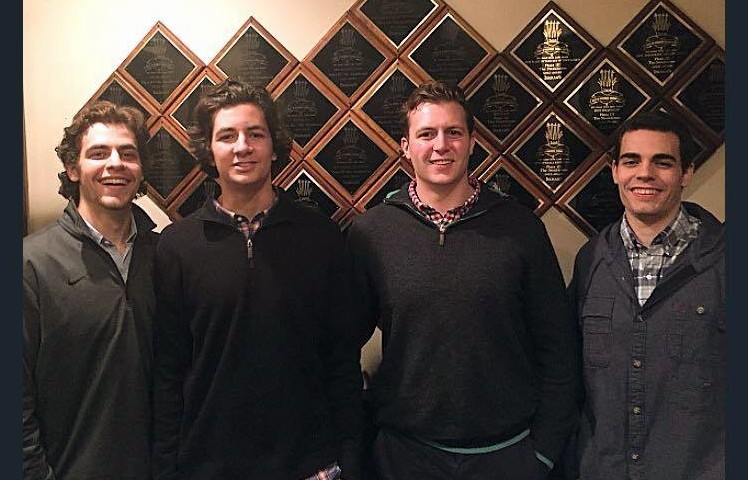 Life began to unravel for Rich O’Connor and his three brothers during high school. A precarious financial situation turned desperate, and his family was forced to sell their home. The stresses also shattered the group, with parents and children flung to all corners of the country. At a time when Rich’s classmates were preparing for the exciting college application process, his future grew increasingly uncertain. He struggled to keep himself and his brothers upbeat.

Despite the turmoil, Rich joined the swim team as a “Senior Year Rookie” and helped lead it to a state championship. He was awarded the team’s Matthew C. Cahill Award for his leadership, dedication and teamwork. Rich was also among a select group of High School Seniors to attend the Summer Leader’s Seminar at West Point.

Rich says: “I had worked hard so that I could go to college, but I was nervous about the cost of tuition considering what my brothers and I had just gone through.” In 2012, the College Men’s Club awarded Rich a scholarship that helped him to attend Miami University of Ohio the following year. “The impact that that scholarship had on my life was huge. It gave me the opportunity to go to college,” he said. “And it opened my eyes to the power of giving.”

At college, Rich has taken the “giving lesson” to heart. He works weekly soup kitchens at local churches. He also started and coordinated a fraternity-wide pantry drive to supply the needy with household items. “We were able to send the needy home with three times as many items as usual”.

Richard is a member of the National Society of Collegiate Scholars, the National Society of Leadership and Success and the Miami University Asset Management Group. He sat on the Executive Council of his fraternity, and held a part-time job at a dining hall. He will graduate in June with a Bachelor of Arts degree in Political Science and Economics, and has accepted a job with Morningstar, an independent investment research and ratings company in Chicago.

Rich feels an obligation to repay his supporters with success. “When you owe people who don’t expect to be repaid, you pay them back in the only way you can –  by working as hard as you possibly can and through making the most of college and all of it’s resources.”

Throughout his college career, Richard has stayed in touch with The College Men’s Club. “It’s a tremendous networking opportunity – I have received invaluable guidance and direction from club members in my search for internships and full time employment. The College Men’s Club’s impact on kids and their dreams reaches far beyond college – they are there for you for life.”

Rich began his new job at Morningstar in Chicago at the end of June. He is training to be part of Morningstar’s Commodity Data Solutions Support Team, which helps clients integrate commodity, energy and futures data into their risk management and trading systems. Rich is loving life in “City of the Big Shoulders”.

Rich said “None of this could have happened without the support of the College Men’s Club”.

We are happy to have given him a boost.